Dude, As a Rule I Do Not Buy Girls Weapons As a Gift

It seems my kitchenware, mostly a bunch of hand me downs or beat up crap I've been destroying since college, is so lacking it prompted a food-loving friend of mine to buy me a new skillet and a chef's knife for my birthday. His roommate's comment on this choice of gift was
adept: "Dude, as a rule I do not buy girls weapons as a gift."

To return the favor, I bought this friend an ice pick for his birthday. We are now fully armed.

The Joy of Cooking in my Pajamas

Recently someone gave me the new 75th Anniversary edition of Joy of Cooking. This is probably the most important cookbook ever made with over 4000 recipes and instructions for the most basic and necessary of kitchen techniques.

Sunday morning I lay in bed imagining what was in the fridge that I could turn into breakfast without leaving the house. Stale multi-grain bread + eggs = French toast? Eh. Fennel and olive omelet? Yuck, no. Old granola? Instant grits? No and No. Plain old eggs, which I never seem to fry to a desirable consistency, just weren’t going to do. I didn’t have anywhere to be until the afternoon, and wasn’t hungover for the first morning in days. It was time to try something challenging.

I cracked open the crisp new pages of Joy of Cooking and browsed the eggs section. Now if I were slightly less broke and had had the foresight to make plans with a friend, I would have been dining at one of Park Slope’s many fine brunch establishments, probably on challah French toast or eggs Benedict. Instead I was in my jammies, listening to The Cure in my kitchen at noon trying to summon my inner cook.

Could I make eggs Benedict? I’d never tried. I’d never even made poached eggs. I remembered reading recently that you can retain the shape of poached eggs better if you place a ramekin or a mason jar lid or something like that in the bottom of the pan, but having neither handy, I decided my eggs would have to hang loose.

Joy has three variations for Hollandaise sauce. (It also has an egg recipe called Scotch Woodcock, but that’s neither here nor there). The first is the standard Hollandaise Sauce, which called for ten tablespoons of butter and three large egg yolks. Then there is the Blender Hollandaise sauce, calling for almost as much butter and the use of a blender, and who wants to clean that? I went with a third variation called Quick Whole-Egg Hollandaise which called for whole eggs and less butter and seemed less likely to fail and less likely to give me a heart attack. I also considered for a minute making Eggs Béarnaise because I have a fond memory of a drunk coworker loudly explaining at dinner with a client how the béarnaise sauce was made out of BEARS! Turns out béarnaise calls for a whole lot of tarragon and “1 shallot, minced,” which are simply not things I keep around the house. 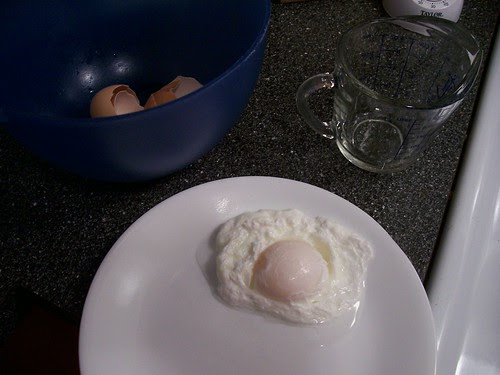 I’m always astounded when, through the magic of science, some new culinary experiment actually does what the recipe says, and I was thinking this as the butter, eggs and lemon juice started to thicken in the pan into a sauce and my gooey eggs turned into nice little white blossoms in the simmering pot. Soon I had constructed my creation atop toasted whole-wheat English muffins and crispy turkey bacon (what, you thought I had Canadian bacon handy?).

Verdict? Well, I’m not about to open my own brunch spot in Park Slope, but for something I pulled together with whatever scraps happened to be handy, my own Eggs Benedict was fairly tasty, and looked even better. 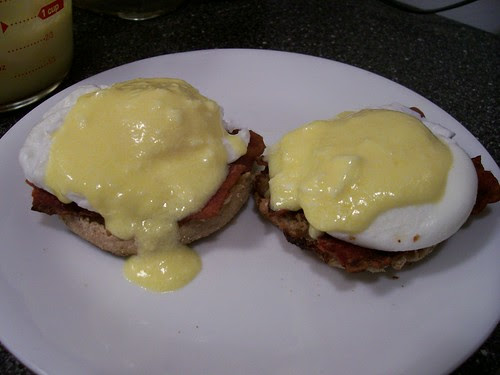 Next week, Scotch Woodcock? Oh, and if anyone has suggestions on what to do with a cup of leftover Hollandaise, speak up.
Posted by Homemaker at 10:15 AM 1 comment:

Welcome to Our Blog

We're great friends with even greater ambitions. Although we'd like to have it all—the perfect house, the tastiest food and the shabby chic-iest of vintage furniture—we also like to spend a healthy portion of our meager paychecks on booze, partying, and...well...booze. To be honest, we sort of suck at being the domestic champions we know we are destined to be.

So until we can afford the Eames furniture, bake the perfect soufflé, or even remember to make our beds before we dash out of our apartments in the morning, please allow us to share with you our trials and errors. Especially the errors. And while we're at it, maybe you can teach us a thing or two ...like where we left our keys last night? Everything after that second dirty martini is sort of a blur.

Posted by Homewrecker at 11:44 AM No comments: