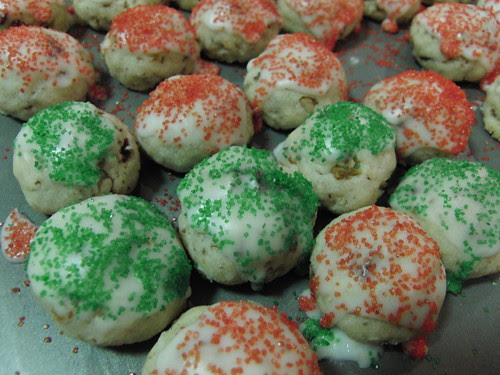 Happy Holidays everyone! I wanted to share with you my favorite Christmas cookie recipe -- Christmas Balls. Of course I can't talk about delicious Christmas balls without channeling the SNL sketch with Alec Baldwin showing off his Schweddy Balls on NPR. Trust me, bake these balls and you won't be able to wait to get them in your mouth too! Christmas Balls
Cream butter and vanilla; add sugar, creaming the mixture until light and fluffy. Blend in water. Stir in flour, mixing well. Add pecans. Shape in 1" balls. Bake 1" apart on ungreased cookie sheet in 325 degree oven. Bake 20 min. or until firm to the touch. Cool before removing from pan. Frost with conf. frosting and coat with coconut or with red and green colored sugar.

I decided to bake Christmas Balls yesterday when the first blizzard of the season had me holed up indoors, relishing wearing my jammies all day. Turned out I had all the necessary ingredients for balls except for 1 cup of pecans. Rats! I tore apart the cabinet looking for some kind of nutty stand-in, and luckily I came across the remains of a stash of "Culinary Touch" nut mixes sent my way by the fine folks at Fisher Nuts. These blends, intended to "add delicious flavor to any dessert or meal" were about to do just that. Fisher's pecan, cranberry, orange blend seemed like it would work, and perhaps even improve my balls.

Whatta you know, the touch of cranberry and orange made my favorite Christmas cookies even more delicious. Didn't even think it was possible! It took me awhile to find a use for the Fishers Culinary Touch blend, and this was the perfect occasion.

Posted by Homewrecker at 12:37 AM No comments: 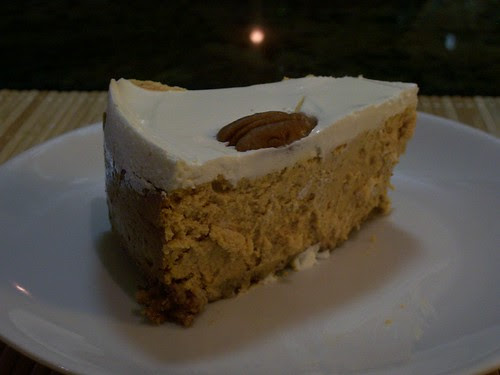 In my last post I was prepping for Thanksgiving, hosting for the first time! Everything went great, the parents were pleased and delighted to meet one another, though we barely made it through cheesecake and boardgames before passing out from exhaustion.

I can't take too much credit though. While my main man did most of the cooking, I merely handled the clementine cranberry sauce and the pumpkin cheesecake. Thank you to my friend Nancy who suggested an alternate recipe from Smitten Kitchen which I actually ended up making for the big feast. I tried Martha's the weekend before as practice, but it never quite solidified in the middle. It did however make a delicious dip for ginger cookies!

That said, next time I think I will combine both recipes and make Martha Stewart's cake (baked somewhat longer) with the pecan crust from Smitten Kitchen and the sour cream frosting. It will be the ultimate pumpkin cheesecake!!! 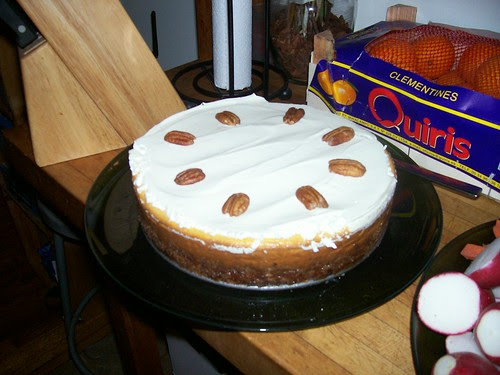 So I know Thanksgiving was about a month ago, but do you think it's ok for me to eat the last 3 slices of cheesecake still hanging out in the fridge?
Posted by Homewrecker at 4:14 PM No comments: