An Ode to Summer Sweets

On this last unofficial day of summer, I felt it was time for an ode to summer desserts. 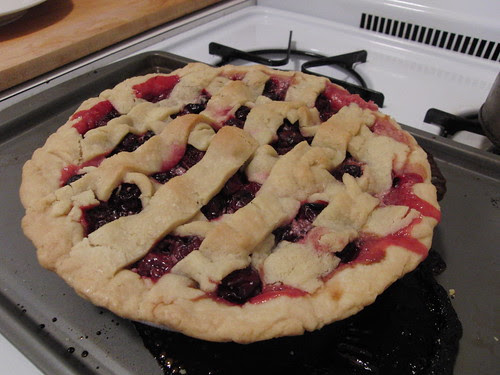 Earlier this summer I got a cherry pitter, a blogger gift from Cookware.com, an online source for every conceivable kitchen item be it a coffee maker or an ice cream scooper. After a sloppy but delicious attempt at apple pie, I decided for the cherry pie to try a more traditional pie crust recipe from Joy of Cooking that relied on vegetable shortening. While the fresh sweet cherry insides were delicious, and the pitter a huge help, I gotta say the crust was greasy, too salty, and even more impossible to roll out and cut than the recipe I used for the apple pie.
But the real problem was my lack of a proper pie pan. As you can see in the photo above, the disposable aluminum pan I used leaked all over, effectively fusing my cherry pie to my baking sheet. I'm pretty sure much of this pie was consumed with a spoon directly over the sink. 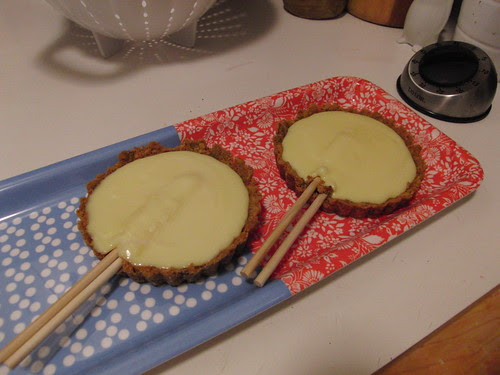 My next summer dessert endeavor was much more successful. Down in Red Hook, Brooklyn is a whimsical spot called Steve's Authentic Key Lime Pies. Steve's has these crazy delicious things called Swingles which are tart-sized key limes pies, dipped in dark chocolate and frozen on a stick.
[Pauses while you drool] Yeah, I know.
So when I received a set of tart pans as a wedding shower gift, the first thing I thought to bake was homemade Swingles. Luckily I found the actual Steve's Authentic key lime pie recipe on the Food Network's website, and it was surprisingly simple. Figuring out how to dip the tarts in dark chocolate, however, was much more challenging. Without a double boiler big enough to dip a whole tart into, I simply melted dark chocolate baking bars in the microwave and poured it over the top of the tarts, spreading it out with a rubber spatula. After freezing them for awhile, I flipped the pies and poured chocolate over the other side, then returned them to the freezer. Somehow it worked! 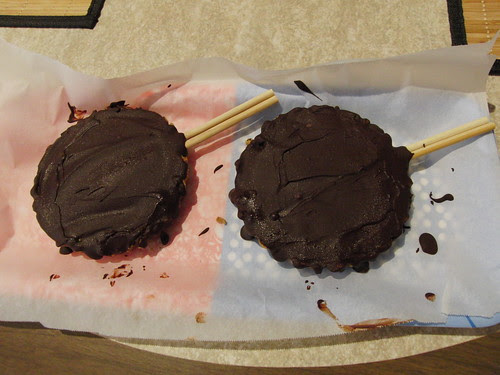 When I visited Steve's later in the summer, I realized that my Swingles were about 50% larger and I probably didn't need to melt an entire chocolate bar over each one, but hey, my decadent DIY Swingles sure made Mr. Homewrecker happy. 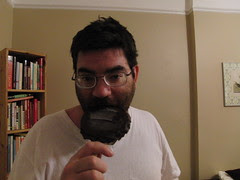 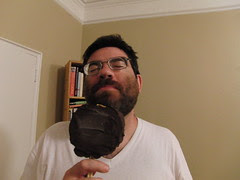 With the success of the Swingles, I confidently decided to wing it with another tart pan creation. My mom had given me a bag of rhubarb from her garden, so I improvised rhubarb blackberry tarts using the same graham cracker crust from the Steve's recipe. And whatta you know, it worked! 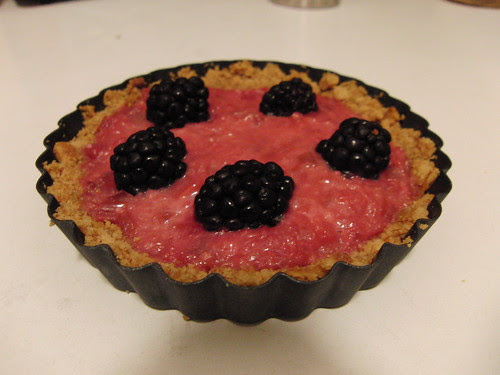 Of course no summer dessert ode would be complete without a nod to ice cream. And since I have not yet attempted to make my own, I would like to give a shout out to my favorite, local, hand-crafted ice cream -- Greene Ice Cream. Last summer the proprietors of The General Greene, a great restaurant in Fort Greene, Brooklyn, built an ice cream cart and started peddling kick ass Philadelphia-style (eggless) ice cream made in small batches from seasonal ingredients. Locals rave about the Salted Carmel Pretzel and I'm crazy for the Bitter Chocolate Mint. If you are ever in the neighborhood, run don't walk to The General Greene before ice cream season is over!
Bidding farewell to summer is as bittersweet as those Swingles, because the only thing I love more than summer treats, are the pumpkin and spice desserts of fall. Keep an eye out for another product review from Cookware.com or another of the CSN network of online shops -- perhaps it's time for a proper pie pan.
Posted by homesweethomewrecker at 8:06 AM 2 comments: