Summer is for BBQs

I've been a slacker about posting on the blog all summer because I've been too busy doing what one is supposed to do in the summer -- abandon the kitchen for outdoor BBQs! Aside from taking one rainy Sunday to bake a strawberry rhubarb pie, I've been soaking up the sun at lots of friends' backyard and public park BBQs. Kudos to the Shameless Carnivore for grilling prosciutto-wrapped asparagus and delicious pickle brine-soaked pork chops last weekend, made from spicy McClure's pickle brine no less!

Summer also means outdoor concerts, and I've managed to see one almost every week between the Pool Parties, Celebrate Brooklyn, East River Music Project and River to River. But there is one event that will be combining my love of summer BBQ and summer outdoor music -- the New York Magazine "Highbrow BBQ" on August 23rd. It's part of their successful New York by New York live music series. Here's the info below -- buy your tickets now! You can even enter a Best BBQ food challenge. 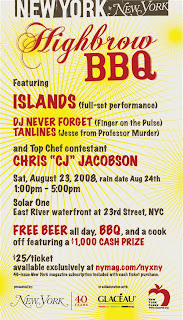 What: Highbrow BBQ
Who: Former Top Chef contestant Chris "CJ" Jacobson and a full-set performance by Islands
When: Saturday, August 23rd, 1:00pm - 5:00pm. (Rain date August 24th, same time.)
Where: Solar One, East River waterfront at 23rd Street, Manhattan
How much: $25, buy your tickets at nymag.com/nyxny
Is that it? Nope, a 46 issue New York magazine subscription is included with each ticket purchase

This event is presented in collaboration with Glaceau. New York Cares is a charitable partner.

Admission is all ages but ID will be required for drinking.

Posted by Homewrecker at 2:40 PM No comments:

Last weekend, after attending a childhood friend's wedding, I was lured by the promise of danishes and mimosas to a day-after brunch at the bride's parents' house. Turns out this was also a trick to get us to watch the newlyweds open their pile of wedding gifts. I've never really understood the appeal of sitting around watching someone open many gifts when you have no gifts of your own to open. I love Christmas morning gift opening, because everyone gets something, but bridal showers, baby showers, graduation parties... it's dull. Especially wedding gifts because we all saw the registry. There's rarely any surprises.

Even further beyond my understanding is why one would want to videotape the gift opening, as the father of the bride was on this occasion, and watch it again later. Of course, this particular video will have the running commentary of her dad's wonderfully awful puns. Guess which gifts were being opened while these one-liners were delivered: "They're barely married and you're already MUGGING them!" "Boy, I can really DISH it out!" "You seem really BOWLED over by that gift!" "I think this marriage has gone to POT!"

The good friend sitting next to me agreed that this is not an activity we'd ever want to relive by watching the video, which led to the plan that when I get married the gift opening will happen via webcam. That way anyone who really wants to watch can do so from home, and even fast-forward to their own gift being opened, while I remain in my pajamas amid a pile of Crate & Barrel boxes.

Even better, my friend added, "you can have the maid of honor Twitter all your gifts as you open them instead of taking notes!" It was then decided that my friend will get ordained online and preside over my eventual Web 2.0 wedding. Guests will be invited via Facebook and each sent home with a flashdrive keychain party favor.

You can add to my earlier post about this modern internet age two additional engagements I recently learned of thanks to Facebook. This is not including the wedding I'm heading to this weekend -- that's two weekends in a row! I get the feeling this couple are the type of people who already have everything, so I decided to get them a primarily edible gift. I filled a basket with local pickles, organic coffee, tea, dark chocolate covered peanuts, ginger chocolate, wine from the bride's home state and ceramic mugs from the city where the lovebirds met - NYC! 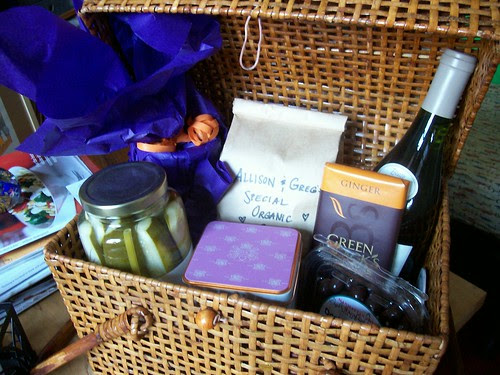 Posted by Homewrecker at 6:02 PM 2 comments: