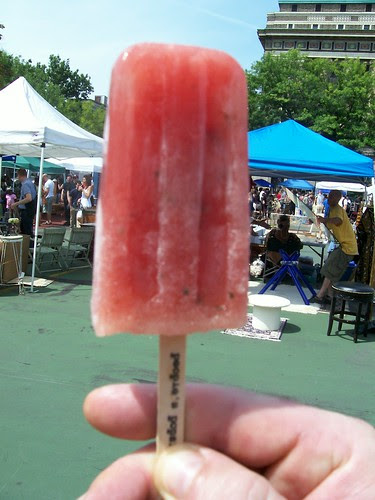 With the last sweaty month of summer beating down on NYC, it was perfect weather for popsicles. Inspired by the People's Pops (pictured above) who have been selling their local ingredient-made pops at Brooklyn Flea and other neighborhood spots this summer, I set out to try my own hand at freezing up some treats. 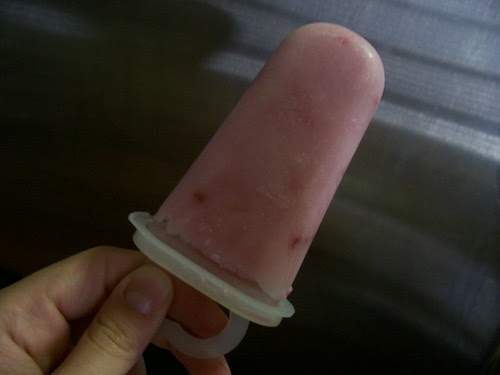 First I went with an old standby that Mom and I used to make when I was a kid. Yogurt pops. I distributed a couple heaping spoonfuls of Stonyfield Farm's strawberry low-fat yogurt into six popsicle forms and with small chunks of fresh strawberry mixed in. Verdict? Delicious, and relatively guilt free! 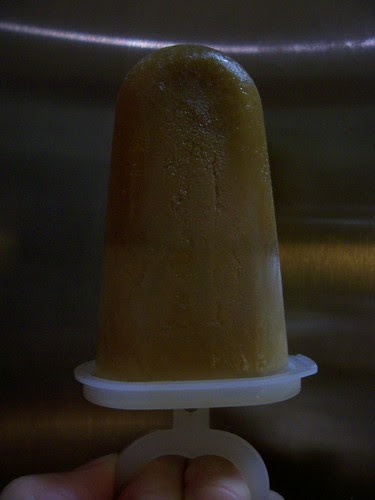 My second popsicle project was a recipe I found via ReadyMade Magazine. I had some trouble making the two layers of semi sweet and super sweet coffee work with my particular popsicle forms, but it worked out in the end despite lots of sticky condensed milk and coffee squirted all over my kitchen. If I did these again, I would omit the less-sweet layer. Sure the two-toned pop looks cute, but I found myself racing through the icy and somewhat watery dark layer to get to the extra sweet bottom layer.

Try this one for yourself here: Vietnamese iced coffee pops on Cookbook Catchall 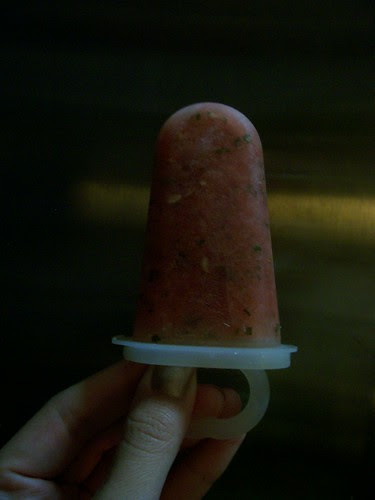 Finally I decided to see if I could replicate the delicious watermelon mint pops that People's Pop were selling at the Flea. I harvested mint from my sprawling window mint plant -- the only thriving plan in my apartment -- and set to work blending it with watermelon chunks in my food processor. 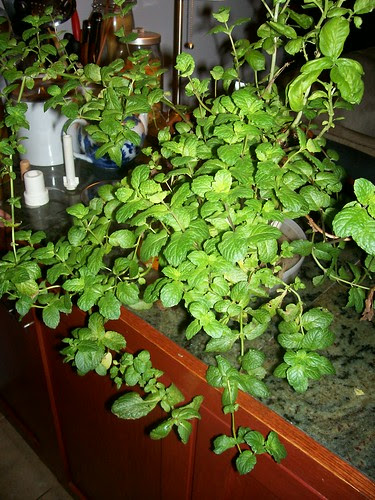 The results were pretty good, though if I did it again I would strain the blended watermelon first and then add the mint so as to omit any extra seeds or stringy bits that snuck by me.

People's Pops are still supreme, perhaps due to the sheer pleasure of enjoying them in the hot sun instead of my own kitchen. Some things are best enjoyed outside of the home.
Posted by Homewrecker at 11:35 AM 1 comment:

When a Problem Comes Along, You Must Whip It

Need a rug to tie the room together? No problem. Now you can adorn your floors with the artwork of songwriter and Devo man Mark Mothersbaugh.

"They'll cover a hole on the floor; you can sweep things beneath them. You don't have to feel reverential about the artwork. You can walk on it. You can do your prayers on it if that's your predilection. And there are many ways to get rug burn on it." - Mark Mothersbaugh, about his rugs on nowherelimited.com

Visit Nowhere Limited to purchase you own limited edition rugs. But hurry while it's not too late, to whip it, whip it good...
Posted by Homewrecker at 11:22 AM No comments: