Ladies, be thankful that this isn't your bedroom.

Can you even imagine sleeping, let alone getting "romantic" in a bed that resembles a football field? (Ok, maybe you can guys, but I'm talking to the ladies...) Sometimes I see those design shows on TV where they try to incorporate some husband's overgrown baseball paraphernalia collection or model train obsession into the home decor. It usually looks something like this, and if I ever marry that person, well... No I just won't marry that person. Can't do it.

Thank you Fantasyland Hotel for some laughs. Check out the igloo room, the truck room and other delights including the "Canadian Rail" room which kind of just looks like my parents' living room in 1989.
Posted by Homewrecker at 5:26 PM 5 comments:

My mom, an avid gardener, encouraged my green-thumb-in-small-spaces by giving me a Chia Herb garden for Christmas. She picked one up for herself too, and we planted them around the same time to see whose grew better. I’m comforted somewhat by Mom’s reports that her garden isn’t exactly flourishing, but I’m pretty sure it’s doing better than this… 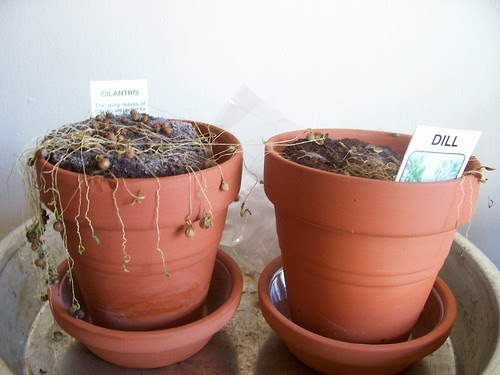 Apparently you need to water them more than once every two weeks. Sigh. But, still wanting a crop of tasty herbs on hand, because I hate picking up a hefty bunch from the store only to use a pinch while the rest turns to ooze in my vegetable bin, I am determined to try, try again. Apartment Therapy has a good, and attractive, plan for a one-pot herb garden that I may give a try.

In the meanwhile, I’ll just have to keep using up that excess mint from the store on mojitos!
Posted by Homewrecker at 9:51 PM 1 comment:

Until I have the husband and the money and the room and the life skills to pop out any kids of my own (on purpose), I enjoy observing the baby making steez of my friends and friends of friends (because let's face it, my best friends are just as busy drinking, paying off debt and not-being-married as I am...).

In this post I want to share some pics from my coworker's sister and bro-in-law's adorable nursery for baby-to-be. Their choice of birdie art from Pottery Barn Kids is right in line with my growing collection of ceramic birds. A collection that is sure to be overgrown and creepy by the time I'm elderly. That right boys, who wants to make babies with the crazy bird lady? 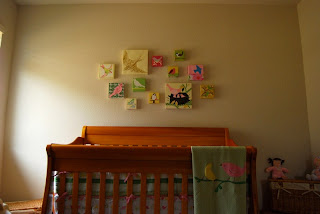 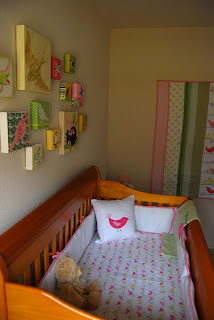 Recently kombucha has become the hot new health beverage. This fermented tea claims to have fantastic detoxifying effects on the body and may even give you a natural high, it's just that good for the bod. I have friends that swear by it, and I've tried it a couple times hoping to find a sense of well being in a bottle (since the usual bottle doesn't always do the trick).

I can't say I'm convinced that this vinegary, bubbly, living beverage really does anything special. At least not for me. Though I respect, and even envy, friends who so enjoy the healthful effects of kombucha that they are now growing their own "mother fungus" at home to ferment this elixir themselves.

But what I really want to know is, if you spill half a bottle of kombucha in your purse, is a macroscopic solid mass of microorganisms going to grow a mother fungus in there? Um, because I'm a little worried.
Posted by Homewrecker at 2:01 AM 2 comments:

Someone told me about this home cooking tribute to the orange-colored, caffeinated malt liquor known as Sparks the other night. I can't remember who because I'd been drinking way too many Sparks and I was both drunk and walking on the ceiling. Nevertheless, I always like to support my fellow home wreckers, so I thought I'd share this truly creative and disgusting cooking show with you. Bon appétit!