The HSHW household recently bought a KitchenAid stand mixer. You know, the classic ones that every good homemaker should own. And now we do! Shoutout to Target for having it on sale for only $199.99.

I hadn't actually used it yet -- Mr. Homewrecker has been using it to make his from-scratch chipotle mayo -- so I browsed the little cookbook that comes with the mixer and came across a recipe for popovers. For those unfamiliar, popovers are similar to Yorkshire Pudding, which like many English "pudding" dishes isn't anything like the Jell-o we're familiar with. It's bread. And it's eggy and delicious. 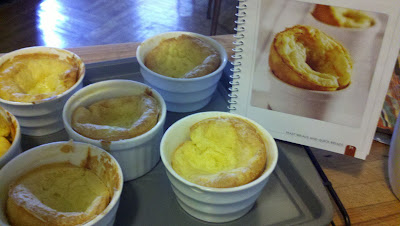 And, as it turns out, they're a total breeze to make, especially with the stand mixer. I'll share the recipe with you all since it's a cinch. The hardest part was greasing and flouring the ramekins. A large muffin tin would work as well.


Place eggs, milk, butter, flour and salt in a mixer bowl. Attach bowl and wire whip to mixer. Turn to Speed 4 and beat 15 seconds. Stop and scrape bowl. Turn to Speed 4 and beat 15 seconds more. [Now, if you don't have a KitchenAid mixer, I'm fairly confident this entire step could be done with a hand mixer or a wire whisk and a little elbow grease]

Fill 8 heavily greased and floured custard cups half full with batter. Place cups on cookie sheet. Place cookie sheet in cold oven and set heat at 450 degrees F. Bake for 15 minutes; reduce heat to 350 degrees F and bake 20 to 25 minutes longer. Remove from oven and cut slit into side of each popover. [I guess that's to deflate them? I skipped this step since mine de-poofed on their own after only a moment out of the oven] Serve immediately. Yield: 8 popovers. 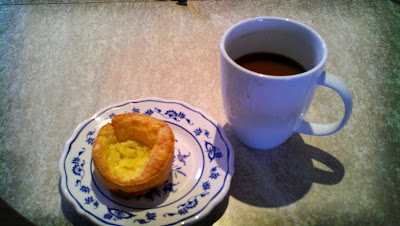 Serving suggestion: I think these would go great with apricot jam. Today I had them with Anarchy in a Jar's Hot Fireman's Pear Jam with Chipotle and Cinnamon -- also a great pairing (pear-ing?)

Posted by homesweethomewrecker at 1:40 PM